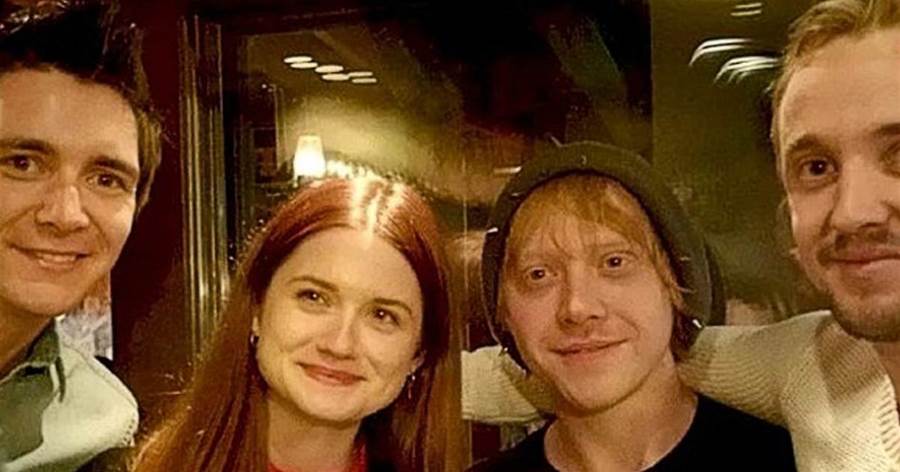 Tom Felton has reunited with his on-screen  Harry Potter rivals, the Weasleys, in a new photo. Felton starred as Draco Malfoy in all eight of the Harry Potter films, alongside Rupert Grint, Bonnie Wright, and James Phelps who played three of the Weasley siblings, Ron, Ginny, and Fred respectively. The first movie in the series, Harry Potter and The Sorcerer's Stone, celebrates its 20 year anniversary this year, with the Chris Columbus fronted film having sparked the unbelievable pop culture phenomenon that followed over the next ten years.

The film series concluded back in 2011 with the release of Harry Potter and The Deathly Hallows Part Two. Felton appeared in each of the eight films as the blonde-haired bully from Slytherin house who became the nemesis of Harry Potter and his friends, in particular, the Weasleys, who Draco mercilessly mocked throughout their time together in school. Despite their on-screen relationship being far from friendly, the actors speak incredibly highly of one another and have previously been pictured together in both social and professional settings. Since Felton is still close with a number of his other Harry Potter co-stars including Emma Watson, who played Hermione Granger, the 34-year-old has always been open about his hopes for a full cast reunion at some point in the future.

Now it seems fans could be closer to a reunion than previously thought. Taking to Instagram, Felton shared a photo of himself alongside Phelps, Wright, and Grint, who all look very happy to be reunited. Felton even referenced their on-screen rivalry by captioning the image "secretly Draco always wanted to be a redhead." Both Wright and Grint are sporting their signature red hair in the sweet photo, while Phelps can be seen donning his natural brunette locks. Check out the photo below. 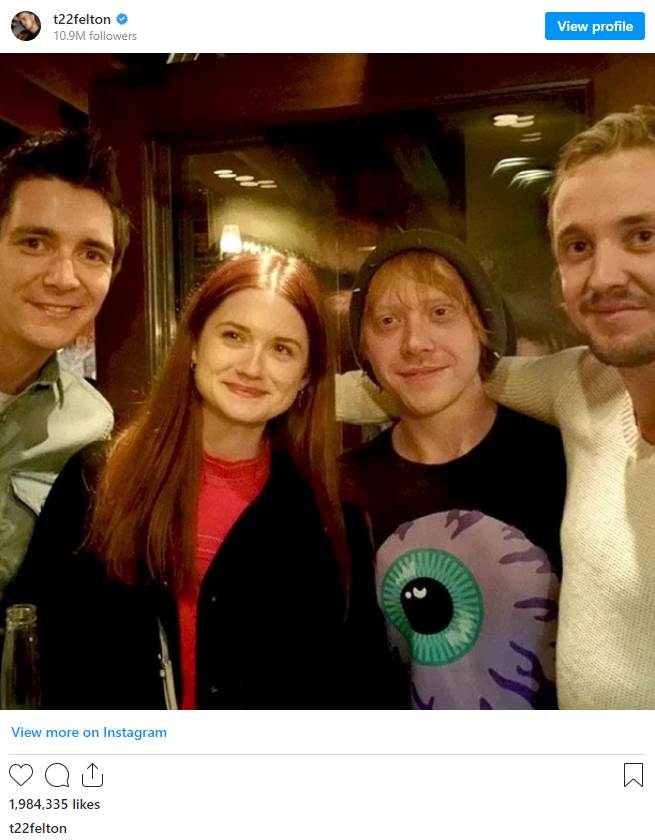 Despite having taken on a number of projects since his time within this beloved franchise, such as Rise of the Planet of the Apes and CW's The Flash, the actor appears to be incredibly proud of his Potter roots. Felton frequently delights fans with fun call-backs to his time in the Wizarding World and this sweet reunion is no different. The actor even dressed up as Harry Potter for Halloween, taking to social media to share his costume that included Gryffindor robes and even Harry's iconic lighting bolt scar.

Felton recently suffered a health scare after he collapsed at a golf tournament, so to see the actor back on his feet and in good spirits will certainly be reassuring for many. Harry Potter fans will also be delighted to see the film's stars back together and while the group likely had a lot to catch up on, perhaps there may have been some chatter of a future reunion since Felton has expressed that he's keen to reunite with his fellow Hogwarts alum. It will certainly be exciting to see what the future holds for the  Harry Potter franchise, but in the meantime, fans can hope for more small-scale reunions such as this.