You're a 12-year-old performer, standing on the national TV spotlight, and you've just been told you won $1 million dollars and a headlining spot in a Vegas show.

Yeah, you cry, even if everyone around you (comedian Preacher Lawson and musician Chase Goehring, in particular, plus millions of video views) told you that you'd win.

Darci Lynne Farmer, 12, is the new champion of 'America's Got Talent'

At least that's exactly what singing ventriloquist Darci Lynne Farmer did Wednesday night when she was crowned America's Got Talent champion.As she described it to USA TODAY after the show, "It was waterworks right here on this face. It was like a water faucet."

Farmer had a hard time keeping it together when she was standing next to her friend, singer and runner-up Angelica Hale, because her feelings had been "all bottled up inside, because I felt so loved on my  journey... and it just all came out."

That is, until her family ran onstage to embrace her, and she noticed her younger brother had tears in his eyes, too.

"I'm really, really happy because my little brother cried and he's never cried before," she said. "And it made me laugh too, because I'm like, 'You're crying, man. You're crying.'” 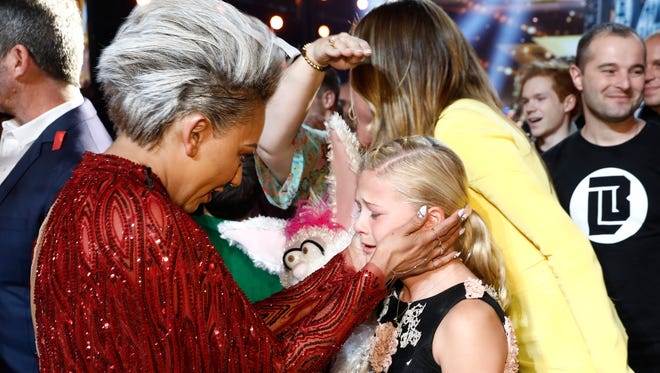 But about an hour after the live broadcast was over, it seemed the Farmers had all dried their tears, and the young winner was happy to answer questions about how she planned to spend her winnings. Some of her big splurges?

"I have to get my mom a dishwasher, and maybe get a fridge along with it," Farmer said. "I want a pug so bad, because I love puppies and it's been a long time since I had a puppy. They have wrinkles and fat rolls and they're so cute."

Seeing the excited Farmer, puppet-less and extolling the virtues of extra dog-skin, it makes you forget that she's one of the most talented ventriloquists in the country who, in her performance this week, operated two singing puppets with distinct voices.

"The way I would describe her style is flawless," ventriloquist and Season 2 champ Terry Fator told USA TODAY.

Fator worked with Farmer on material for the show and performed with the young star in the finale. He also extended an invite to have Farmer appear on his Vegas show after she's done with her own.

"She is, at 12 years old, one of the most unbelievable, perfect ventriloquists I've ever seen, and she'll only get better," he said.