Home » Brave Mother falls 4 floors with her daughter, then "crawled over and put her body on top" in Surfside condo collapse

Brave Mother falls 4 floors with her daughter, then "crawled over and put her body on top" in Surfside condo collapse
Josephine
Josephine

After falling into a coma for five days, Angela Gonzalez woke up on her birthday to learn that her husband has died and that they lost absolutely everything they owned along with their apartment of 15 years. Angela and her daughter were inside the Champlain Towers South in Surfside, Florida, when the building came began to collapse. They both miraculously lived to tell the harrowing details, but sadly, they are left grieving the loss of a husband and father, Edgar Gonzalez.

On the day of the condo collapse, Angela and her husband were watching a horror movie with their 16-year-old daughter, Deven, at around 1:30 am. They were in the master bedroom when they felt the building start to shake "like an earthquake."

"I just screamed, 'Run!' And just kept screaming to run. (Deven) was half asleep so I was dragging her out of the room, as fast as I could, but like she said, we didn't make it very far," Angela told TODAY. "We made it maybe a couple steps out of our bedroom, and then the floor just started to cave. It was like two little falls. Falling as the floor caved in, and then I just grabbed her for the remainder of the fall."

Deven also recalled the final moments they spent in their ninth-floor apartment and said, "I remember Mom yelling, 'Run!' and dragging me out of bed. I was half asleep. I thought I was dreaming at that point." As the apartment building began to collapse, Angela fell four floors down while Deven fell down five stories.

The mother and daughter got separated, and Deven continued screaming for help, said Angela's mother, Kathleen Gonzalez, according to TODAY. Angela then "crawled over and put her body on top of my granddaughter and they fell again all the way down to the third floor," Kathleen previously said.

She added that Angela smashed her pelvis during the fall and suffered several injuries, including a collapsed lung. "She was literally crushed, and it's just amazing that she's sitting up in the bed today," Kathleen said in the month of July.

Paramedics also couldn't believe that the mother and daughter survived the devastating condo collapse that took place on June 24. "They should not be alive," considering everything that they have been through, the paramedics said. 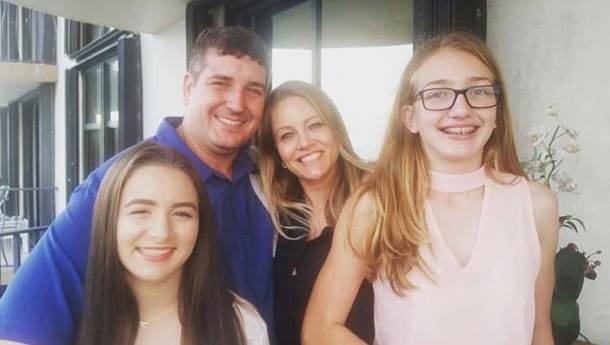 Finally, rescuers were able to retrieve Angela and Deven from the debris; they brought Angela out using a door, acting as a makeshift stretcher, which they extracted from the rubble.

At the hospital, Angela's older daughter, Taylor, who was not in the building during the collapse, identified her and Deven. The mother and daughter received medical attention, and Angela was in a coma for five days before waking up on her birthday to find out that Edgar was killed in the collapse.

"He was my best friend, he was my — my person," Angela told TODAY. "So every day, you go to sleep, and then you wake up and your whole life is completely different."

The family lost absolutely everything they owned after staying in the Surfside apartment for 15 years. The one thing they were able to recover was Edgar's wedding ring, which he was still wearing when his body was found.

Still waiting for answers that will explain what happened on the night that shattered their lives, Angela said: "I want to know why my husband lost his life. I want to know why they don't have their father, and I know I'm not the only one who lost loved ones. My heart breaks. I have my daughters, so I have something to look forward to, but I know there's other mothers there that have lost a husband or a child, and it's just not OK. It's not OK."