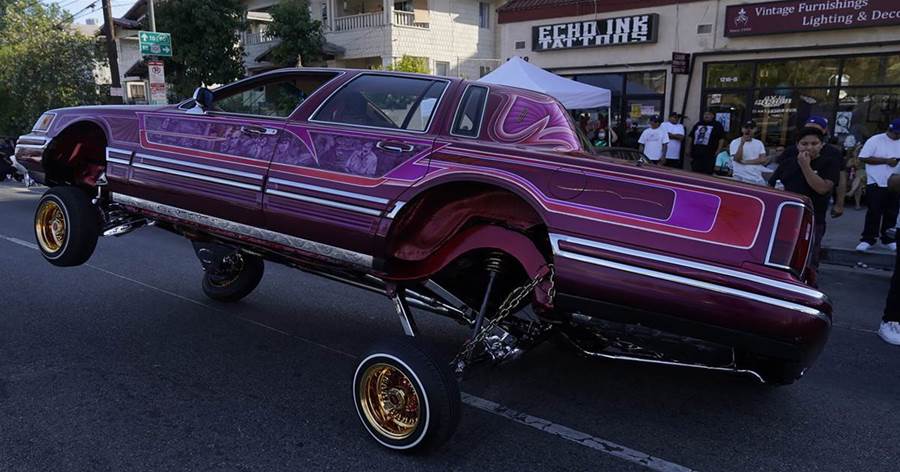 Growing up in San Francisco's Mission District, Roberto Hernandez loved zoot suits. He loved art, too. It was only a matter of time before he started lowriding.

"It was in my DNA," Hernandez said.

As soon as he could, he bought his neighbor's 1964 Chevy Impala and began to cruise "low and slow."

Hernandez was drawn to the elaborate paintings on the hoods and trunks of other lowriders, which had lowered bodies that hovered just above the street, and the hydraulic systems that made them bounce a few feet off the ground. He remembers the “joy of being able to cruise with a couple other lowriders and then just have people whistle at you or wave at you.”

But in the late 1970s, as lowriding was rising in popularity among Latinos in Southern California, lowriders were also becoming the targets of police.

"At one point it was bumper to bumper for 20 blocks. It was like a parade every Friday and Saturday night," Hernandez said. "It was something that the police just weren't able to manage.”

Police issued citations, made arrests and even shut down Mission Street, the neighborhood's main drag where the lowriders went to cruise.

But enforcement of the local laws wasn't always equal. The lowriders were mostly Latino, and Hernandez said that explains the ferocity of the police crackdown.

"It was racial profiling at its worst, and it was discrimination," he said. "Across the city, on the west side of the city, they had white kids racing for pink slips. And they never messed with them.”

Eventually Hernandez, who said he was arrested 113 times and beaten up by the police more than once, had had it. He and several other lowriders filed a lawsuit against then-San Francisco Mayor Dianne Feinstein and the police, alleging violations of their civil rights.

In 1981, Hernandez united a group of car clubs to form the San Francisco Lowrider Council, an advocacy organization that helped lowriders stand up to police brutality then — and which just marked its 40th year in operation.

How lowriding has evolved over the years

The exact origin of lowriding is a matter of debate, but generally, it was a Chicano invention in and around Southern California after World War II.

"It begins in the Mexican-American southwestern experience of the United States, in the barrios," said John Ulloa, a professor of history and anthropology at Skyline College and a lowrider.

It started as a blue-collar pastime. Gas was cheap, so lowriding was an inexpensive way to have fun with friends. It also united the Chicano communities in the Southwest and became a vehicle for local community organizing.

For many years it was a Latino subculture, but lowriding grew in popularity in 1979 when the film was released, plastering the low-slung cruisers across the silver screen. The movie brought renewed attention to lowriding, but it also reinforced a stereotype that lowriding was associated with gangs and crime.

"You had a lot of cops who just didn't like lowriders, and they exercised their authority to write any ticket or any violation or make up anything that they wanted," Don Alonzo, vice president of Low Creations Car Club, said of the tensions between lowriders and police.

But lowriding only continued to bounce higher in the public consciousness. Rappers Dr. Dre and Snoop Dogg cruised through music videos in lowriders to promote Dr. Dre’s 1992 hit album, . Ramone, a character in the Disney movie , is a lowrider. Just this year, there were lowriders in a Model commercial featuring the artist Mister Cartoon that aired during the Super Bowl, TV's most coveted ad space.

"I was mapping for my forthcoming publication on the global diffusion of lowriding, the globalization of lowriding, [and] I started to map where lowriding is, and I think the more accurate map is … where it isn't,” Ulloa said. "Where is lowriding now? It's everywhere.”

Lowriding has moved from a local custom to a worldwide phenomenon, from Japan to Germany to Brazil.

Cruising was taboo. Now it's treasured

The city settled the lawsuit filed by Hernandez and other lowriders several years after it was filed.

Hernandez said he refused the city’s offer of a monetary payout, and that the final settlement guaranteed the lowriders’ right to cruise, led to a park and a gym being built and saw several police officers leave the force.

"It wasn't about money," Hernandez said. "It was about the whole discrimination and blatant selective racism and use of excessive force by the police department"

The San Francisco Lowrider Council’s 40-year trajectory was just memorialized in an exhibit at the Mission Cultural Center for Latino Arts. San Francisco city officials even proclaimed a recent Saturday as "Lowrider Day."

According to Alonzo, who is also a member of the council, lowriders are viewed much differently now than they were in decades past.

Ulloa, who hosted a virtual academic conference on lowrider culture this year, said that growing popularity has come with a catch: the cost to participate in the once blue-collar hobby has jumped. “It's redefining who can get in, where and under what circumstances people are quote unquote buying into the culture," he said. "That is causing some dissonance from within the culture as well, because people are getting priced out of the game.”

"We were stereotyped by the media and by a lot of people as being drug dealers and gangbaners and whatnot," said Hernandez, who is also a community organizer and launched the Mission Food Hub during the pandemic.

"Part of that stereotype went like, 'Well, how could they afford these kinds of cars and put all that money into cars?'" he added. "Well, we work!”